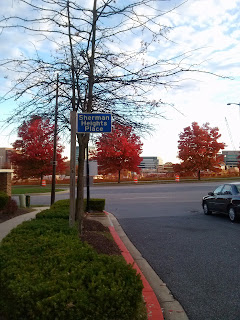 Recently, someone asked me if I was OK with the development going on in my "front yard" and whether I "knew" about it.

I often have this conversation with people when I tell them I live outside of the Cheesecake Factory (no, I'm not homeless as one woman assumed one day at the gym).  We live in the center of the neighborhood, but we hear the trash pickup at Cheesecake sometimes in the morning, which is pretty loud at 5 AM. Living close to the hospital and Banneker fire station, helicopters flying low and fire engines racing by are common occurrences in our life. I used to tell my cat Derby that the police were coming for him, but I ceased doing that when our daughter was a couple years old. (I had to put our cat Mischka to sleep when Lil was 3, so I didn't want to unnecessarily freak her out. Now that she's 9, I do tell our cat Beckham this, because I secretly hope he will be imprisoned. He gave me tetanus when he was a kitten.)

Our family lives in a somewhat urban area - no, it's not downtown Baltimore and drunks don't regularly knock on our door and I've only heard gunshots once (our drug dealer neighbor, who got foreclosed on eventually). But there is crime: broken basement windows & such petty crime. I am nervous to walk home from the mall sometimes. A lot of people walk by my house on their way to the mall & toss trash in my postage stamp yard. A very nice neighbor who walks her dog by my house sometimes picks up that trash. It's not quiet suburban living by any stretch.

My husband & I moved to this neighborhood in 2003 when our particular development was about halfway done. We were specifically attracted by promised growth - construction of the Cheesecake Factory happened in 2004 (and we were there opening day) and amorphous plans for the parcels across from our development.

Finally, plans were approved and finalized last year and construction started early this year. The first building is the Metropolitan Columbia. There will be retail on the first floor with apartments above. They may eventually turn into condos, but they will be rentals at first. This may not attract families as Columbia Compass and The 53 espouse. But here's my hope, it will bring younger people to Columbia, who become interested in the cool, fun atmosphere in Town Center, like Merriweather Post, enjoying the additions to the mall and watching movies at the Lakefront on a warm summer eve. Having dinner at Clyde's or the new Cindy Wolf restaurant, enjoying the beauty of Lake Kittamaqundi, while listening to live music during the summer are all downtown Columbia treats. And maybe spending more time at Symphony Woods than just the annual Wine in the Woods. And maybe decide they'd like to start a family here.

So, yes, I know about the development and I've been excited for YEARS. Yes, traffic will get worse, but our community - what's really important - will get a jumpstart.