Maybe it's because we've lived in Columbia long enough that we appreciate the nuance, the seemingly hidden, the aha discovery...

We walked into the Grand Floridian from the Monorail tonight & paused at the elaborate crest on the floor. As we were returning to our home resort, we had a few moments to enjoy. We found Daisy, Donald, Minnie, Pluto, Goofy & of course, Mickey.

I feel that way about the chair in our room where I'm writing right now. It's off to the side, but I love it as it's comfy & inviting (and pretty).

Grand Floridian is a lovely spot if you're looking for a hotel stay at Disney. Tomorrow, we start an actual Disney Vacation Club stay at the Treehouse Villas at Saratoga Springs. I'm excited but I will miss my boat horns...

@@@hocoblogs
Posted by KirstyCat at 9:28 PM No comments:

Bored with Board elections?

Last night, I was able to join in celebrating the fantastic fundraising of Tom Coale of HoCoRising for the homeless of Howard County. Second Chance Saloon hosted the party after the original location in Old Ellicott City was affected by the CSX train derailment.

Howard County boasts some very intelligent people engaged in the political process and inevitably, some of them were there to celebrate. I had the chance to ask Ellen Flynn Giles a few questions about her candidacy for Howard County's Board of Education.

She's an incumbent, and I initially went into the primary election with the thought that after the past few years of dealing with Allen Dyer & the very quick turnaround of the superintendent search, the incumbents in this cycle should be voted out. Before the vote, though, I had a discussion with a friend who advised that Ms. Giles was the one incumbent worth keeping.

Last night, though, I was able to confirm that friend's recommendation. I asked for more information about the fact that Howard County doesn't own their own school buses (with a couple of exceptions). Another candidate, whom I am absolutely NOT supporting for several other reasons, does advocate this. Coming from Montgomery County (although not a product of the public school system), I was generally in favor of their ownership of their school buses. My other reason had been that the Howard County system closed on the first day of school last year due to a hurricane. Montgomery was able to open the majority of their schools, which one school official indicated was because they have their own bus fleet.

Ms. Giles presented her opposition to county ownership in a reasoned way - growth of personnel costs without the more competitive bid process currently in place, the real estate problem of depots & the administrative effort that would detract from the County's maintenance of effort on a per student basis (I have a basic understanding of this).

I also expressed my concerns with the superintendent search (although I think they made the correct decision). It happened very quickly. I now understand the inclusion of a candidate from Texas, a state with below average educational success. Teachers in both Howard County & Montgomery County have told me that kids coming from Texas are about a year behind their cohorts here. I hope it works out for Baltimore County, but I'm glad we got Dr. Foose.

We constantly hear about STEM - Science, Technology, Engineering & Mathematics - and how America is falling behind. I get that completely. However, literature & history should not be ignored - studying the liberal arts encourages critical thinking, which is crucial to STEM! I majored in Accounting & Medieval History - two completely different disciplines, but my writing skills helped me in the Accounting field in which I worked. But I remember taking Honors Chemistry my freshman year in school and consistently getting A's in the class. My classmates thought I was crazy to take it since I wasn't majoring in Science. I didn't care. I loved chemistry! My point is that math & science are important, but don't leave out the liberal arts. Yes, I got a job in Accounting, not History, but that doesn't mean my studies are wasted.

Turns out that Ms. Giles is also a medievalist! She appreciates the need for well-rounded students. Luckily, my daughter is able to participate in some of the Gifted & Talented Curriculum Extension Units at her elementary school. Last year, she came home & said I had to sign a paper for "arch-a-lol-ligy" - the CEU's name was "Let's Dig It" & it was archaeology, but it was difficult to say. She loved the class - it was science, history & critical thinking rolled into one "outside-the-box" program. I told Ms. Giles how important those classes are & how much my daughter has loved them. She seems to agree that education should encompass more than just STEM. And given that she herself enjoys both history and science makes that campaign promise believable.

Now if I could just figure out who the other two candidates I'll be voting for are - but we've got a couple months to go!

Choosing positivity for once

For those of you who know, know that I get annoyed...easily, often & spanning many elements of my life.

But let's be positive for a moment...even now, when lots of people are sans electricity & unsure when it'll be back.

The month of June was wonderful! (Until Friday night, but I can call that July, right? Because Sunday was July?)

We got our brick (yes, it was placed in May, but dedicated at the Columbia birthday celebration in June!) at the Lakefront right in front of Clyde's where my hubby & I had our first date. (OK, yes, we kinda got together in front of our co-workers at Arthur Andersen at the end of August at the weekly happy hour on Water St. Stop it, Calendar Police!) We're nearby another blogger who is an original Columbian. But I think 15 years is pretty good! 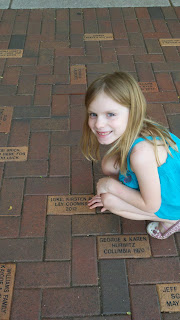 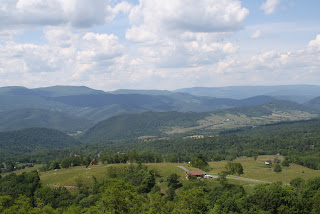 As school ended, we left on a Friday morning to head west to St. Louis for my cousin's wedding. I chose to go the scenic route through West Virginia. Up & down the mountains we went. The weather was perfect. We did see a lot of poverty though as well as some enterprising gas station owners, charging 70 cents more than ﻿what we paid in a more populated area. Hey, I get it. 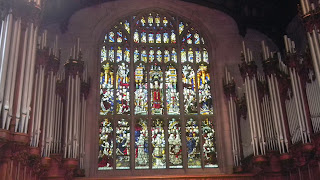 My cousin got married in beautiful Graham chapel on the Washington University campus. The service was very nice & it was followed by St. Louis barbecue at the Third Degree Glass Factory. This was a very cool idea - during the cocktail hour, while the wedding party was getting pictures taken, we got to watch a glass-blowing demonstration.﻿ 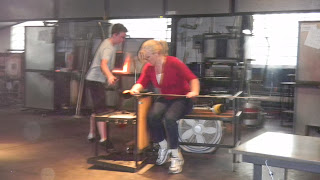 While the journey was 28 hours in 4 days of driving, it was a great road trip listening to audiobooks & looking at scenery. The St. Louis Zoo may not have pandas, but from our brief trip there Sunday morning, we liked it a lot. It's an easier walk than the National Zoo. 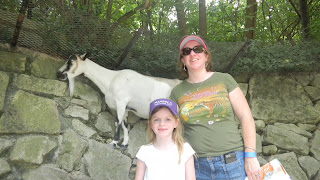 The following weekend was the kick-off of the annual Columbia Festival of the Arts at the Lakefront. We saw Cirque Carpe Diem do their trapeze act 4 times. We got schooled in sidewalk chalk art. I had no idea what was required when I registered for it. I get it now. And next year, I'll have the proper equipment.

But I'll take back something about Friday. On Friday, I went to the pool with a new old friend. We beat the heat & talked. So Friday afternoon was definitely part of the best June I've had in a while.
Posted by KirstyCat at 1:34 PM No comments:

Posted by KirstyCat at 2:00 PM No comments:

The last few weeks have been busy! Ballet rehearsals & recitals, a cruise, a weekend drive to St. Louis for a family wedding and enjoying the LakeFest & Columbia's Festival of the Arts. This means we have been doing a lot of driving (well, not the cruise, but...).

My husband traded in his old Camry for a new Camry Hybrid, which he is LOVING. He had gone to Antwerpen pretty much convinced he'd get a new one. That wasn't what I thought was going to happen, but when he called me after my workout to come over to the dealer, I was pretty sure I knew the outcome of the day. He drives a LOT - commuting to McLean, VA most days of the week from Columbia & he is the breadwinner since I haven't been working with pay for a couple years - so he probably should get to drive what he wants, right?

Even though I knew it was a done deal & I was starving after my workout, I test drove the car. While you want to test it out, like romp on the accelerator & see how it responds, I have a nervousness about test driving a car. The sales guy wasn't in the car, but I think it's natural to be a little worried about driving someone else's car. Plus, the gear shift was on the floor while in my car, it's on the steering wheel column. I kept hitting the window wipers on the Camry as a result.

I had driven into a neighborhood & gotten to a dead end. For years, I have thought Linden Church Road connected between Routes 108 & 32. For the record, I was wrong (yes, I can admit it...sometimes). When I started to continue back the way I came, there was a beautiful deer running across the road. I wasn't going fast, maybe 10 mph, but I was a little nervous Bambi's girlfriend was coming too. Usually where there's one deer, there's a second...So I proceeded with caution.

As I returned to the dealership, I exited from 32 at 108. I missed the green light to turn left at the top of the ramp. Weird thing about me, I stopped at the red light. When the light turned green for me, I moved into the intersection. However, the first car waiting to turn left did not seem to feel the same way about their red light. I honked. I MADE EYE CONTACT with this woman. She continued forward cautiously, but she STILL MADE THE LEFT TURN. WHY??? I was clearly in the intersection & there were cars behind me. She had a RED LIGHT. Even though there's a blinking red at this light, it's SOLID when cross traffic has a green light.

Since we live at the mall, I often take the mall entrance if I catch that light. There are signs all over that say "Incoming traffic has right of way." However, both the incoming & the people sitting at the STOP sign seem to disregard that. People stop where there is NO STOP SIGN. The people who should allowing incoming traffic in continue on as if we're at a 3-way stop. But we're NOT, people!

Yes, we have sign prohibitions in Columbia...But could we follow the signs that ARE posted? And maybe not make up fictitious signs while we drive? Don't Columbians LIKE rules? Isn't that why we live here?
Posted by KirstyCat at 1:24 PM No comments: